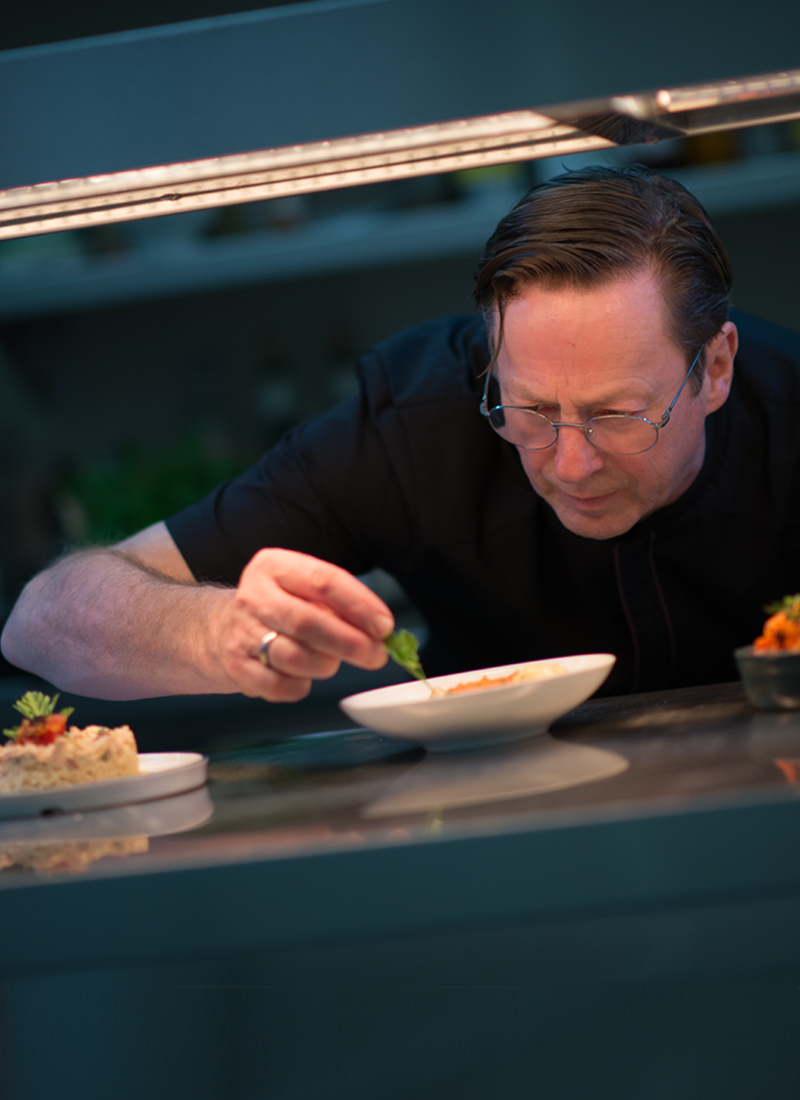 Cooking has shaped the entire course of Werner Wagner’s life. One of ten brothers, he started helping his mother to prepare family meals at a young age. His earliest memories of his role as kitchen assistant include choosing a bunch of young carrots in the family vegetable garden and picking fresh mushrooms in the woods.

At 14, he started a four-year apprenticeship at the Zur Post restaurant in his native village of Saint-Vith, in the province of Liège. This is where he would learn his trade and spend a large part of his career, gradually climbing the ranks towards the top position.

His insatiable curiosity meant that the young cook, now Chef, never lost his desire to learn from others. He spent his holidays touring the great Michelin-starred restaurants of Germany, Paris and even New York!

He never travelled without his trusty companion: a little notebook used for jotting down ideas to try at home, to reproduce their flavours, cooking methods, presentation, serving conventions… The restaurant’s regional cuisine grew towards a more international style, inspired by French gastronomy. Within a few years, it was awarded its first Michelin star, to be followed by another ten years later.

Werner learned from the masters. He completed many internships with such prestigious names as Claude Deligne, Chef at the Taillevent in Paris, Jean-Claude Bourgueil, creator of Düsseldorf’s renowned Im Schiffchen (both three-star restaurants), Piet Faveere, owner of the famous Jef Damme patisserie in Ghent and, more recently, Jacques Chibois, Head Chef at the Bastide Saint-Antoine in Grasse. He gratefully acknowledges that they taught him everything he knows.

When he met the love of his life, Anita, now his wife, it was time to adopt a pace that was more compatible with family life. After 30 years of sterling service at the Zur Post, Werner joined Banque de Luxembourg at the start of the millennium. From the beginning, he was only given one rule: keep it simple, light and authentic. He now follows this motto almost religiously. Stripped of the lavish sophistication of high-class cuisine, his cooking is becoming ever lighter and more refined, as it reclaims and asserts its natural origins. Rising at 5 am, he immediately sets out on the 120-km journey to La Provençale, Luxembourg’s largest market.

As he browses, he allows himself to be seduced by the ultra-freshness of a quivering sea scallop, the passionate red of a tomato fresh from the vine, the sumptuous curves of a Bresse chicken, or the nutty scent of a justpicked morel. The recipes come later, on the way back, as he lets his mind wander wherever it is taken by the scents, colours and sounds of the surrounding landscape.

Werner Wagner reminds us that we should wonder at the simple and natural things in life. A lover of nature, he knows how and where to pick the gifts that she presents to us every season. And dares to create unprecedented but simple harmonies. He goes wherever his inspiration takes him – a freedom that he treasures most of all. There are no fixed menus or permanent recipes at La Villa du Parc Amélie. The Chef improvises daily, according to his mood at the time, the weather, the quality of daylight… He enjoys nothing more than the challenge of reproducing on a plate the colours of a meadow full of flowers, or recapturing the aromas of a long walk in the woods. Using only the finest ingredients, and meticulous in his methods, he champions freshness and authentic flavours above all else. For Werner Wagner, a dish should be alive: beautiful, colourful and enticing.

This site is registered on wpml.org as a development site.